The New Hampshire State Hospital was established in 1842, the 17th such hospital in the US and the 7th in New England. Planning began in 1830. After numerous studies and discussions, the NH Legislature chartered the NH Asylum for the Insane in 1838. The name was later changed to the NH State Hospital.

The New Hampshire State Hospital was established in 1842, the seventeenth such hospital in the United States and the seventh in New England. Planning for the Hospital began in 1830 as the condition of the insane began to awaken a deep interest in the hearts of philanthropic persons in the State. At the time, the insane existed in deplorable conditions ranging from confinement in chambers lacking heat to imprisonment in county jails. Others remained homeless wanderers. After numerous studies and discussions, the Legislature chartered the New Hampshire Asylum for the insane in 1838. (The name was changed to the New Hampshire State Hospital in 1901).

It took three years of debate to determine a site for the Hospital. In 1841 it was decided to locate in Concord. With a $9,500 grant from the city 120 acres was purchased. This extensive space allowed the Hospital to include a farm and to be self-sufficient. The pleasant, natural environment, in which the patients could live and work, was considered highly therapeutic. The Hospital grounds were continually improved by extensive plantings. Prominent architects, including several with national reputations, designed the State Hospital buildings. They were considered state-of-the-art for their time. 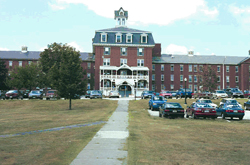 Built in 1842 this was the first building to be built on the hospital grounds and, for nearly fifty years, the only building. The original building consisted of a central four-story building with two three-story wings. Within the central section were the superintendent's office, business rooms, dining rooms, and sleeping quarters for staff. The kitchen was located in the basement; the attic was left unfinished to provide space for a chapel. The wings had long central corridors lit only on the far ends. Off the corridors were the patient’s rooms; when their doors were closed, the corridors were dim and depressing. To compensate for this, some of the sleeping rooms were later removed and replaced with sitting rooms that brought constant light and a more uplifting atmosphere into the corridors.

Elias Carter of Worcester, MA designed the main building. The trustees of New Hampshire Asylum were anxious to provide the best for their patients. In later years the slate covered roof, dormers and a two-story Stick Style Porch were added, creating a more comfortable, approachable building. In 1909 the building had attached twelve major additions, including the Chapel building, more dormitories and two buildings for highly excitable patients, to the Main building. The southern portion was dedicated to the female patients, while the northern end housed the male patients. 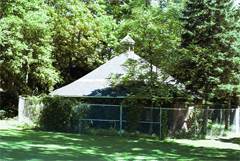 Supplying water to an institution the size of the New Hampshire State Hospital was not an easy task. Shortly after the Hospital was built in 1842 a dam was constructed across Bow Creek to create a six-acre pond on grounds. Water was then pumped to a tank in the main building attic some 90 feet above ground. This supply of water was found to be inadequate to serve the growing Hospital population. The remedy was to sink a well in close proximity to the spring to collect water. The well, built in 1880, was 50 feet in diameter, 15 feet deep and provided 60,000 gallons of water daily. 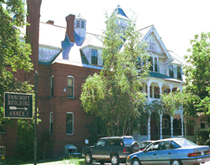 Built in 1892 Bancroft provided additional space on the female side of the asylum and in part provided more ample, comfortable and private accommodations than previously available. Bancroft Building was modeled after buildings in Europe, which provided a more homelike, domestic appearance. 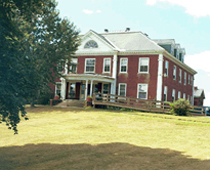 Built in 1894 this building was designed to offer more patient freedom in a homelike setting. Twitchell house was named for George Brooks Twitchell, who practiced medicine in Keene, NH and served as President of the Board of Trustees for the New Hampshire Insane Asylum for forty years.

In 1899 the New Hampshire Legislature appropriated funds to build a residence for female nurses during their intervals of active service at the Hospital. Prior to that time nurses lived on the wards in the Main building with the best behaved patients.

Built in 1907 it met the need for a separate Medical-Surgical building. The first operation was performed there in 1908. The original building was "U" shaped. In the 1940's an addition was placed on the north side, which closed the "U" and created an interior courtyard.

In 1903 the New Hampshire Legislature passed an act assigning to the state the responsibility for care of mentally ill patients throughout the state. Prior to that time, the Hospital had functioned more as a private institution, with a high percentage of curable patients, who were treated and released. Many of the state's incurable mentally ill were indigent and cared for by the counties at country farms or almshouses. With the new act, all patients were transferred to the State Hospital, increasing its population from 475 in 1903 to 1,086 a decade later. The act had an enormous impact on the Hospital. Now, a large percentage of its patients could not be cured and discharged. The buildings added to the Hospital grounds after 1903 reflected the increasing need for space and the change in the nature of the patients. Walker building was built between 1913-1917 in two building campaigns. Its construction represented the fulfillment of long-deferred plans to expand patient housing, made urgently necessary after the State Hospital assumed care of all mentally ill patients, formally in town or county institutions. The design of Walker Building reflects the thinking of the time, for the care of mentally ill. In the belief that housing should be pleasant, comfortable, surrounded by natural beauty, and as homelike as possible, the State built a substantial building, set within beautifully landscaped grounds and provided spacious porches and large well lit dormitory and day rooms.

Built in 1924 the building provided housing for the mentally ill women. A comparison with Bancroft, built 30 years earlier, is telling: the drastic increase in patient population, coupled with changing attitudes toward the mentally ill resulted in a building far more institutional in appearance.

Brown served as the primary facility for all adult patients until 1989. The building was extensively renovated in 1998 and now houses the administrative offices of the Department of Health and Human Services.

Built in the 1920s and 1930s, these residences were originally designed for Hospital directors and medical care providers as an added stipend for their services, as well as to ensure their availability when needed. The Hospital also provided food, laundry, and light housekeeping services. The interiors of the residences were remodeled in 1989 to meet current standards for patient occupancy, and served as transitional homes for patients that were nearing discharge from the Hospital. Each home served as a vocational environment for patients to assist them in regaining essential skills they needed before leaving the Hospital. In 2012, Transitional Housing Services moved under the management of the Bureau of Behavioral Health.

Built in 1930, the Tobey building housed male patients. Much like Brown building, the exterior was very institutional in its design. By 1930 the Hospital reached a patient population of nearly 2,000, the pinnacle being 2,750 in 1953. The building was named after Charles W. Tobey then the Governor of New Hampshire. 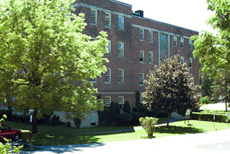 Originally all medical care was provided at Thayer Building. New Hampshire State Hospital employed a staff of general practitioners to provide on-grounds medical care including surgical, routine health screening and dental services. There was no need send patients to area physicians, as specialists came to the facility to treat the patients. The Medical Surgical Building had three Surgical Rooms on the top floor as well as full autoclave capabilities to keep instruments sterile. The lower floors served as intensive care units or as recovery wards. The Dental suites were located in the basement, which also housed the pathology lab and physical therapy department. Routine X-rays and electrocardiograms were also provided on the first floor as part of the normal health screening process for all patients. 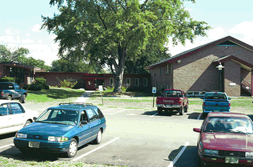 The Anna Philbrook Center is named for Dr. Anna Philbrook who was instrumental in its creation. Dr. Philbrook was one of the first women licensed to practice child psychiatry in this country and in 1933, the 63rd person to become a licensed psychiatrist in the United States. She started her career as a staff Psychiatrist at New Hampshire Hospital. In 1945, she was named director of the State Child Guidance Clinics. This unit had two homes the home of Ambassador John Winant and the basement of Thayer Building before a new facility was built on Hospital grounds in 1959. Until 1969, the North Wing of the Child Guidance Center served as an outpatient treatment facility for emotionally disturbed children. In 1969, Dr. Philbrook's dream became a reality when the rest of the structure was completed as an inpatient unit and was named the Anna Philbrook Center. This building served children ages 4 – 15 until 2010 when the children’s inpatient unit moved to the Acute Psychiatric Services building as consolidation of services occurred.

Built in 1989, this building is state of the art in psychiatric care for New Hampshire's adult and elderly populations. The architectural designs allow more natural light to reach patient care areas to assist in the healing process.

The atmosphere as you enter gives the look of openness and welcome to those who reside and visit. Though primarily an inpatient care facility, the Hospital hosts several outpatient support groups and programming to assist the public and families in recovering from mental illness.